She’s So Cold: Murder, Accusations and the System that Devasted a Family by Donald E. McInnis 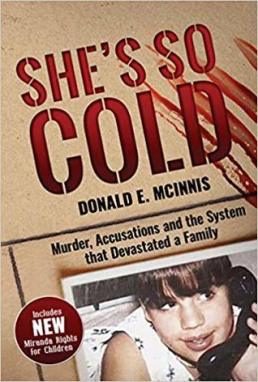 This work describes a true crime that occured in 1998 is the story of the murder of Stephanie Crowe and its aftermath.  She was found stabbed to death in her bedroom by family one winter morning. Because of his reaction to the body and fact he woke up during the night to go to the kitchen, her brother, Michael, became the prime suspect.  McInnis then charges that the police used psychological manipulation to force a confession from Micheal and two of his friends. The actual transcriptions of those interview was frequently included to help illustrate the point.

What follows is more investigations, trials, and following other leads and McInnis illustrates how the teenagers were often manipulated, misled, and mistreated.  He then uses this example as grounds for proposing a Children’s Miranda Rights and Bill of Rights for Children who are being questioned as suspects. Copies of his proposed documents are included in the appendix and written in a way to be accessible and understood by children.  As a whole, the focus was more on the treatment of minors who are suspects and less on the case itself.

She’s So Cold  is written with two contrasting styles.  On one hand, the organization is set up similar to a thesis or trial.  It features an introduction that provides and overview and sets up a thesis.  The rest goes on to prove the thesis, ending with a conclusion and appendix. On the opposite hand, instead of reading like a stuffy academic book, this work is very readable.  McInnis uses clear, descriptive language to describe all aspects of the case. That makes the book read more like a novel than a work on nonfiction. As McInniss was a defense lawyer on the case, he is very close to his subject matter and is also able to provide his own insights.  I think that those who like true crime or legal works will enjoy this book.

This review is based on a copy provided by FSB Associates.

Thank you for visiting Amy's Scrap Bag! Do you have any thoughts, comments, and/or questions? Cancel reply

The Best of the Scrap Bag

Unless noted otherwise, uncited images used on this site are original except for book covers. Any further use of these images is prohibited without permission from the author.

Sharing or to linking posts (or text excerpts) with proper citation is allowed.